In recognition of those who have served our country in the military, Heather Wilkinson Rojo of the Nutfield Genealogy blog started the Honor Roll Project. It’s an opportunity to publicly document the names on military memorials around the world, thus making them easily searchable on the internet for people who are looking for them!

This is a continuation of the names on the World War I memorial on the green in Norwalk, CT. Below is the second panel and its transcription. You’ll note that the first group of names are women! 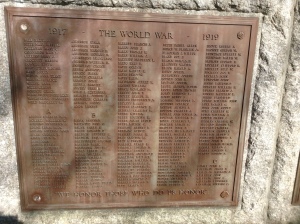 “WE HONOR THOSE WHO DO US HONOR”

I have not yet been able to find Edouard Pleau’s christening record, so I don’t have conclusive evidence of his birth date. However, census records indicate that he was born around 1812-1813. My guess is that he was born in or near Trois-Rivieres, Quebec (although I saw one unsourced place online that said he was born in Berthier). As best as I can tell, he was the fifth of the six children of Joseph Pleau and Marguerite Proulx, the fifth son and the second Edouard! If he wasn’t born in Trois-Rivieres, the family did eventually live there by the time he was an adult. 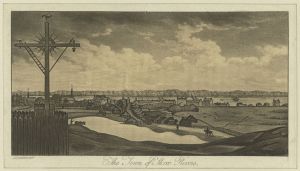 Edouard married Julie LaMothe (sometimes spelled Lamotte) on May 30, 1835 at Cathedrale de l’Assomption in Trois-Rivieres. He became a shopkeeper, but owned 76 acres, 46 of which were gardens and orchards. Perhaps he sold some of his own produce.

As best as I can tell, the children of Edouard and Julie were all born in Trois-Rivieres. They are:

Edouard died on February 1, 1882 and was buried two days later on February 3 in the St. Louis Cemetery in Trois-Rivieres (as recorded in the church records of the Cathedrale de l’Assomption).

When I first started this blog, I began with the story of my great-grandfather George Edmund Pleau and continued with all his siblings. It’s high time that I return to that family line, starting with his parents.

I assume that my great-grandfather was named after his father, George Pleau (though I don’t know if my great-great grandfather had a middle name). George Pleau was born on August 2, 1843 in Trois-Rivieres, Quebec. He was the fourth child and fourth son of Eduouard Pleau and Julie LaMothe (their third son was also named George, but died as a baby in December 1842). He was baptized at the Cathedrale de l’Assomption on the day of his birth. George grew up to be a shoemaker, which was his life-long occupation.

Marie Emma E. LeClair was born and baptized on February 18, 1849 in Montreal, Quebec. Her baptism was at Notre Dame de Montreal. Emma, as she was commonly called, was the daughter of Joseph LeClair and Marie Julie Charpentier and had at least one brother named Joseph Napoleon.

I have no idea how George and Emma could have met, but on November 27, 1866, they were married at her home church. In 1869 they made their move to Rochester, Monroe County, NY, where they proceeded to have their family:

I do see that George was enumerated with his parents in the 1871 Canada Census (between Charles and Cordelia’s births), but I assume the stay was for a short time. He was in Rochester to stay, and the Pleau family lived at many addresses throughout the central Rochester area.

There seems to be a blip in George and Emma’s marriage: the 1892-1893 City Directories show them as living apart. For whatever reason they were separated, they were back together again for the remainder of their lives.

George’s live seemed pretty quiet, but I found Emma’s name in the newspaper a couple times: once in 1899 when she was representing their son Eugene in court after the train wreck he was in, and another time in 1913 when she wrote to the mayor of Lowell, MA via the newspaper The Lowell Sun, searching for her uncle John Savard, who she had been corresponding with. (This tells me that Emma was literate.)

As their children married (and sometimes re-married), George and Emma never had an empty nest; the family (particularly the sons) came and went, and George and Emma themselves spent their last years living with daughter Evelyn and her husband Charles. George died on September 13, 1914 and Emma on February 8, 1918. I can’t find any accounts of George’s funeral, but Emma’s was held at Our Lady of Victory Church, which (being French Catholic) I assume was their home church. Both are buried at Holy Sepulchre Cemetery in Rochester, where I was able to find their gravestones easily first online, then in person.

It was an amazing moment for me to stand at their graves, connecting with a family whose name I had but only recently had gotten to know them through my research.

I know very little about Adam and Elisabeth’s life prior to the 1910 census. So for what it’s worth, the following is to the best of my knowledge!

Both Adam and Elisabeth were born in Lithuania (the censuses sometimes say Russia, which makes sense, considering the constant border changes). Adam was born on March 15, 1858 and Elisabeth (sometimes enumerated as “Eliza” or “Lizzie”) was born around 1862. The ages of their children indicate that they must have married when they were teenagers. All of their children, except for their last, were born in Lithuania, but I don’t know where. (My grandmother had photographs of relatives in rural Lithuania, but she had no idea where the pictures were taken.) Adam and Elisabeth’s children were:

Thanks to Suffolk County’s naturalization records, I was able to find Adam’s declaration of intention paperwork! I know that he immigrated from the port of Bremen, Germany to New York, NY in May of 1893. Unfortunately, he did not remember the name of the ship! But that is enough information to narrow it down to about eight ships, so I will need to carefully comb each ship’s manifest for his name.

Based on immigration dates in census records, it looks to me that Adam immigrated first and the rest of the family later (it looks to be 1899), like so many immigrants did. The Valek family eventually settled on a thirty acre farm on Manor Lane in Riverhead, Suffolk County, NY. Most of the children soon married and settled nearby. It seems that Adam sold the farm in late 1921, according to a newspaper announcement. Perhaps with Frank’s disappearance and the other children married with their own property, it was just too much for Adam to maintain. I know that Adam later lived with his son Antone, so I assume that is where he and Elisabeth moved once they sold the farm.

Elisabeth died sometime between 1921 and 1925. I don’t think she ever became a U.S. citizen. Although Adam filed his declaration in November 1921, he is still marked as an “Alien” in the 1940 census, so I don’t know if his naturalization was ever completed. 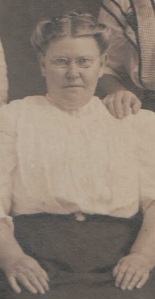 Adam passed away on September 26, 1942 and his estate (which netted about $7,000) seemed to be settled in 1943, divided among his children. I do not know where he or Elisabeth were buried, but I assume it was in one of the nearby Catholic cemeteries.