Every Fourth of July, I try to make it out to Norwalk, CT’s annual “Let Freedom Ring” ceremony at the old Town House at Mill Hill. Out of all the Independence Day celebrations, this one is most true to the real meaning of the holiday. It is celebrated every year nationwide (although it is not formally organized) as a result of a Concurrent Congressional Resolution that can be read here (see the top of the linked page). Every year, it’s a little different; sometimes more elaborate than others. This year was rather simple, but faithful to Independence Day. 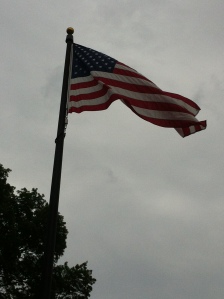 Diane Jellerette, Executive Director of the Norwalk Historical Society, welcomed everyone to the annual “Let Freedom Ring” bell-ringing ceremony. She reminded us of how our own city of Norwalk was involved in the Revolution during the Battle and subsequent Burning of Norwalk, where General Tryon only left about 6 homes standing of nearly a hundred that were in town.

Ms. Jellerette welcomed the many city and state officials that were in attendance. Mayor Harry Rilling said a few words, proudly declaring that, “America is, without a doubt, the best country on earth.” He reminded us of the phrase “with liberty and justice for all” from the Pledge of Allegiance we recited earlier applies now more than ever to all people.

Dressed in colonial garb, Town Clerk Rick McQuaid had the honor of reading excerpts of the Declaration of Independence (to be honest, I believe he read the whole thing).

Finally came the centerpiece of the ceremony: the ringing of the bell thirteen times, once for each newly independent state. (Technically, the bell ringing is to occur at 2pm, but that is when we started the whole ceremony.)  Councilman Erik Anderson read off the list of states as Senator Bob Duff (who attends the event every year) rang the bell of the old Town House.  (I was hoping to embed video, but WordPress doesn’t accept that filetype.  However, you can view my tweet that captured at least part of it here.)

What followed was a beautiful, pitch-perfect rendition of the “Star Spangled Banner” by Catherine Robinson of Norwalk’s Crystal Theatre. Many couldn’t help but join in as the song progressed.

The ceremony concluded as Ms. Jellerette explained that the Town House will shortly be undergoing a renovation. Just recently, the grounds of Mill Hill were renovated to include a walkway and an herb garden, which she invited all to check out. And in the fall, a new Norwalk Museum will be opening up on the same grounds as City Hall after being out of commission for quite some time. There is much to look forward to regarding Norwalk history!