Despite the longer holiday season, my schedule seems to be more packed than ever. However, I still enjoy it, especially since I take care to focus on the things that are most important to me.

One of my favorite activities before Christmas is attending Norwalk High School’s “Candlelight” concert. This is a tradition for the high school for over 75 years – since the mid-1930’s. There were only a couple of times during World War II that Candlelight was not held. Since then, it has been going strong. 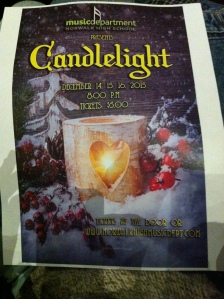 Over the years, hundreds of students in the music department have performed instrumental and vocal music, along with humorous skits and sometimes even dancing. The music ranges from secular to sacred and spans the common December holidays. What I particularly love, however, is the quality of performance every year, and the spirit of the season that the concert embodies.

Does your community have any unique holiday traditions?

Ida Elizabeth Atwell was the second living daughter of William Armstrong Atwell and Altie May Williams. She was born on January 20, 1890 in Providence, Providence County, RI. Like her sister Winifred Margaret, she completed four years of high school, then entered the working world. The 1910 Census showed her as a bookkeeper at an “installment co.”. From 1911 until 1914, she worked as a cashier.

On February 11, 1914, Ida married James Garfield Dilworth, a manager from Worcester, Worcester County, MA. I’m not sure how they met; perhaps his business worked with hers? In any case, this was the beginning of their lives together, travelling across the country.

Ida and James remained in Worcester at first for the birth of their first child, Richard A., on January 10, 1915. By 1919, the family had moved to Colorado, first to Denver, then to Aurora, Adams County (which is right next to Denver) in 1920. Here is where their second child, James Garfield, Jr., was born on October 30, 1920.

1923 found the Dilworth family back in Denver, but by 1930, they moved to their final state, California. They lived in various locations in the Los Angeles area throughout the 1930s and in 1940, always in a cute little house. I have to wonder if Ida’s sister Margaret Armstrong was instrumental in getting them to move to this area. Perhaps the sisters had plenty of get-togethers.

Just three short months after the 1940 Census, James died on July 21. Eventually, Ida made her way to San Diego. There she remained until her death on December 3, 1970.

Having lived so recently, I don’t know whether Ida’s sons ever got married or had children. I do know that Richard died on May 7, 1991 in Prescott, Yavapai County, AZ. James, Jr. died August 7, 1990 in Pacific County, WA. He is buried at Fern Hill Cemetery in Menlo, WA.

So why did the Dilworths move around so much? It’s hard to tell, as James, Sr. held down a variety of jobs, such as manufacturing, sales, insurance and real estate. Perhaps he was simply taking opportunities as they presented themselves.

In recognition of those who have served our country in the military, Heather Wilkinson Rojo of the Nutfield Genealogy blog started the Honor Roll Project. It’s an opportunity to publicly document the names on military memorials around the world, thus making them easily searchable on the internet for people who are looking for them!

This post is the beginning of several I’ll post over time regarding the World War I memorial on the green in Norwalk, CT. There are eight panels with hundreds of names on it. Here is a shot of the whole memorial:

And below is the first panel and its transcription: 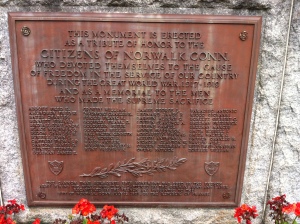 THIS MONUMENT IS ERECTED
AS A TRIBUTE OF HONOR TO THE
CITIZENS OF NORWALK, CONN.
WHO DEVOTED THEMSELVES TO THE CAUSE
OF FREEDOM IN THE SERVICE OF OUR COUNTRY
DURING THE GREAT WORLD WAR, 1917 – 1919
AND AS A MEMORIAL TO THE MEN
WHO MADE THE SUPREME SACRIFICE